Some weird Torment: Tides of Numenera Save Game titles [EN]

Motto: "I fight for the bright and illustrious future. Join up!"

Telepathy Gt [20] (FlexiBility: Mind Probe, Limitations: Obvious, Exhausting; Kind of a weird beast, even for Epsilon himself, it's a super science)

Wizardry As [50]++ (Gadgetry; if it could be theoreticaly built in 40s-50s, given components and blueprints, Epsilon can build it in a minimal time)

Interface Gt [20] (He can interface any computer machines. The problem is that there are so few and most of them are stone age work, anyway)

Precognition Gt [20] (A form of advanced societal/historical hindsight knowledge and extrapolation, rather than a prediction; Global Scale Only)

Super Senses (Infravision, Radio Communication, Time Sense, Microscopic Vision, Intiution Feats: Vision) Gt [20/5 Ranks] (Touch/Space Limitation: Same as with burrowing - if you can and do touch it with your dust cloud - you can feel/see it)

So, I had this weird Fate Core build idea.
— 5 Aspects, 3 Stunts, 3 Refresh, and all not mentioned here, as normal.
— You have no Skills/Approaches. Instead you have "0, 1, 1, 2" to spread among Four Actions, yup you have bonus shifts on actions, not Skills (Initially, it's not my idea, forgot, who suggested it first, sorry). Just make sure, your games have non-combative conflicts, as well.


— After that you fill a list of 'fun facts':
Skills, occupations and perks you possess.
Supernatural powers and signature spells of your liking.
Hobbies, passions, pet projects.
Encounters and relationships with people you've met.
Ideals, creeds, and beliefs from your personal code of honour.
Hunches, clues and ideas you have on campaign's mysteries.
Piece of equipment, a battle technique, solializing approach.
Distinctive feature, a quirk, a vice, something, that makes red and all stuttering.
Well, anything, that's not as important, as Aspects. That's your a dashboard and mindmapping tool. It's a minor bits, that basically help you to "engage with a narrative", to describe things colourfully.
When Aspects is The Most Important facts about your character, it's a bit of details for you to keep in mind. Something above and beyond. These facts aren't supposed to be mechanical, but they can give you narrative permissions to do stuff. Sometimes GM can give you +1 on your roll if everyone's agreed, that "this one is really nailing it", but they should'nt be stacked or anything. Settle on "from ~8 to ~16", dunno, haven't tested it yet.
Those facts is what can become an aspect or a stunt. You can also swap or demote aspects and stunts into your facts at milstones. If your didn't get used in play, it doesn't matter. Picture, made by your four adopted children saved from demon cult, bravest cat in a world, Mr. Bigglesworth, plain ring, you stole from the wretched creature, that prolongs your life. You know about and it warms your heart on a long winter nights. Or it can help you to make a scene. GM might it even suggest you to make an Aspect out of one of these, if current doesn't work very well.


— Fate Points give you Success with Style automatically. When it is set, that aspect is applicable for invocation, opposing side doesn't counter it with their own FPs.
— Compel negotiations work as normal.
— Stunts, Boosts and Free Invokes give you +3 shifts worth of advantage.
— As always, Stunts should be presice as to when they are applicable: Because I "Narrative fact" I get "rules exclusion" when "Action" to "do something specific" "under these circumstances", etc.
— Three Stressboxes.
Автор: Unknown на 21:57 Комментариев нет: 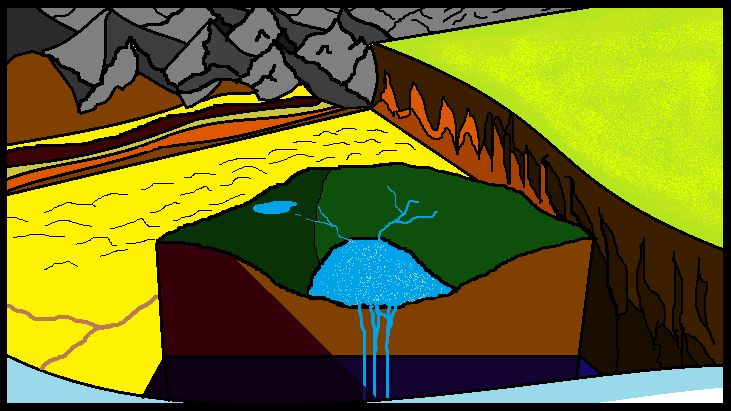 Twenty years ago the skies brightened and hundreds of realms were cut off from their home worlds and stitched together by invisible hands of mysterious force.

Many call this place a New Land. Terra Nova, Chuzjbina, Navinam Ahai, Gebilkur and many other denominations were used by countless tribes and nations.

Strange neighbours were eyeing each other with fear, hunger, greed and hatred. Some mourned their losses, while others sharpened their blades and prepared other woundrous weapons.

Terror and discord would've ruled these lands if not for the threat from outside. The celestial fleet of voidwellers smashed into us, newlanders, with desperate fury and speed, conquering city after city. Realm after realm.

It is when alliance was forged among newlanders. Gathered by [Emperor], a ruler of a small peaceful nation of the Core, a council of realms and technomagic orders, strong enough to fight decided to unite their resources to push invaders back into the darkness they came from.

It was not easy, but in the end alliance held and we managed to take back the lands voidwellers captured... and force them into peace. There simply wasn't enough technomagic resources to fight outsiders in the sky. And besides, destroying an entire celestial fleet was considered to be unreasonable.

As for the voidwellers, it wasn't greed, that led them. At least, not at first. It was hunger. Rebels and exiles of their world had no resources of their own, so they decide to take it by force. But success and starvation for luxuries was what really blinded them. Made them both ruthless and reckless. And that almost cost them everything. At the cost of a huge debt, they were granted peace and trade treaties, after all.

Allied Realms stand together to this day, despite being vastly different in their cultures and morals, while the Core city is the heart of that alliance. It is the center of commerce and cultural exchange. Though, the further you go from the city, the more hostility you would witness. Many Realms, voidwellers included, want more and they want it too fast. Instead of learning from Core, they eye their neighbours with appraising looks.

Gladly, nations are not the only groups with interests. Merchant and humanitarian factions, knightly orders and Five Great Technomagic Paths are greatly interested in expanding their interests across the New Land. And, if my experience is any indication, that means, there still will be wars. Just different. Not all will happen to be as big and bloody.

Archetypes generally chose victims to whom they already bear some similarity in form or function. If the victim is not similar to the Archetype (a sweet teddy bear Archetype attempting to absorb Carmilla the Giant Tarantula, for example), the activation of the Rede is considered 2 uses, and the Archetype suffers a +1 difficulty to all contested Willpower rolls (an archetype with only one cannot absorb an unrelated chimera).

This character was strongly inspired by World of Darkness, we all know and love – bleak, ruthless and unforgiving, with only a handful of weirdos, brave enough to fight evil, but no saint themselves.

Tobias Bear, simply known as “Tobby”, isn’t ordinary teddy bear. After event, at first was seen, as coincidence, Tobby got soul of the dying warrior spirit, and it changed his fate...

It was he, who descended into dark of sewers to find Lantern Ring, who fought the monsters and brought the treasure back home, greeted by a warm smile of Jenny – his beloved ward. He, who drove off Scary Black Dogs from kindergarten. He, who stopped Great Lego Horde in 96th.

He, who was found by old nunnehi greybeard mostly dead in a middle of Arizona desert after… He is can't recall what exactly, but something wrong happened to his ward. Tobby knows – Jenny is in danger and he must find her as quickly, as possible.

Even if it’s too late – he'll sure as hell avenge her. He would laugh back into a Devil's face and feed with lead anyone who dares to stop him. If it will be needed, he can seal evil and wickedness within himself. Forever.

Uh uh. I know what you're thinking. "Did he fire six shots or only five?" Well to tell you the truth in all this excitement I kinda lost track myself. But being this is a .44 Magnum, the most powerful handgun in the world and would blow your head clean off, you've gotta ask yourself one question: "Do I feel lucky?" Well, do ya, punk?